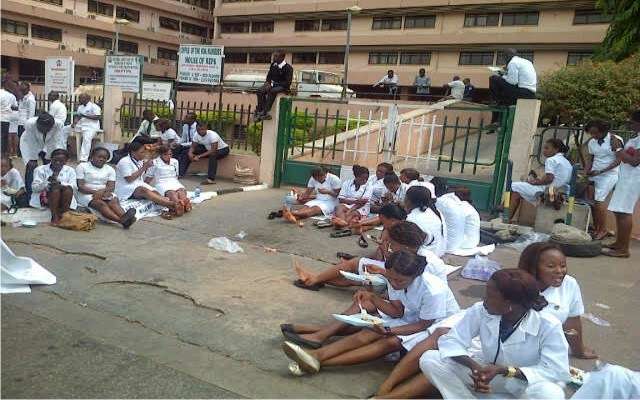 The News Agency of Nigeria (NAN) reports that this was in line with the NARD directive to its members.

The national body of the association had directed its members to wear black ward coats and conduct rallies at the expiration of initial ultimatum given to the Federal Government on Jan. 2.

NAN reports that NARD had on Dec. 19 given the Federal Government up to Jan. 2 to implement the National Health Act 2014 and address other demands of the association.

The |National President of NARD, Dr Kenneth Uwajeh, told NAN in Lagos that doctors at the hospital complied with the directive of the national body. Uwajeh said, “We have black bands on our arms, some of us are wearing black jackets.

“We want the masses to be aware of the plights of the patients, doctors and the society as regard the medical profession.

“If they are not catered for, the health is not catered for; many people cannot afford healthcare because they have no insurance or access to facilities.

The doctor said that the demands of the association had been abandoned for long; this had jeopardised the future of medicine in the country.

According to him, the government should do the needful in order to move the medical profession forward.

“We are asking for a white paper on the residency training programme; basically, it is part of the legal framework.

“We need that because the residency training programme is being conducted in a haphazard fashion. “We want a document so that residency programme can be consistent across the country; we need a clear-cut document that is consistent, objective and void of bias.

“The National Health Act 2014 has not been implemented.

“This basically will cater for the needs of the patients largely and improve the nation’s health indices and practice of the profession, “ Uwajeh said.