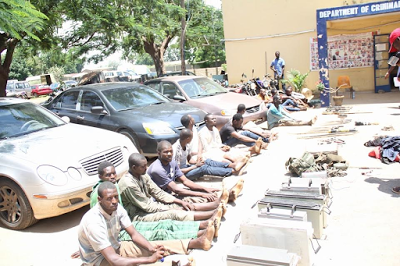 TVC N. The police in Bauchi State have arrested 19 suspected kidnappers for allegedly attacking some villages in the state and holding 48 persons hostage for ransom.

It was learnt that the suspects were arrested in the Toro, Gumau and Ningi areas of the state between Thursday, January 5 and Tuesday, January 10.

According to the police, when the suspects sighted the operatives, they opened fire which triggered a gun battle.

It was gathered that some of the hoodlums abandoned their rifles and escaped into forests with bullet injuries, but 19 of them were arrested.

Our correspondent learnt that three suspects were arrested in Yuga Forest while one was nabbed in Jimi village. One suspect was picked in Tama District, two in Ningi and three in Kundum village.

Three suspects were arrested in Giwa hamlet, three in Ganjuwa, one in Tashan, and two in the Alkaleri area.

The Bauchi State Commissioner of Police, Zaki Ahmed, who confirmed the arrests, said

the police would charge the suspects to court at the end of investigation.

He said, “In order to stem the tide of rampant cases of kidnappings, cattle rustling and armed banditry along Toro, Gumau and Ningi areas, the Bauchi State Police Command stormed Yuga forest, a notorious hideout for kidnappers in the Toro Local Government Area of Bauchi to apprehend the hoodlums.

“The police rescued hostages who were held in the forests and awaiting ransom payment by their families. Forty-eight hostages were rescued in good condition of health.  And efforts are being intensified to apprehend the fleeing suspects. Members of the public are urged to assist the police with useful information by reporting suspicious persons, especially those with bullet wounds to the nearest police station for prompt action.”