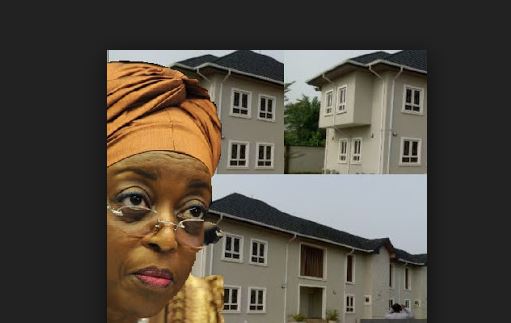 It was discovered by operatives of the anti-graft agency in the course of their investigation of public funds allegedly stolen by the former minister.

The investigators  conducted a search on some of the  houses on the estate.

Acting Chairman of the EFCC , Mr. Ibrahim Magu has already left Nigeria for London in connection with the investigation of the ex-minister and some upscale properties traced to her at home and abroad. About five bank chiefs are likely to  face trial over the $153million allegedly  withdrawn by the ex-minister from the accounts of the Nigerian National Petroleum Corporation( NNPC) in December 2014.

The Nation gathered that the EFCC team,acting  on intelligence,uncovered the  sprawling estate which is coded as BGIS/OK/02/16/310.

It is located on Diepreye Alamieyeseigha Street, off Goodluck Jonathan Road in Yenagoa, Bayelsa State.

A source familiar with the investigation  said: “Following our  obtaining a court order to recover some assets belonging to Diezani, we were able to gather intelligence which led to the location of the hidden estate in question in Bayelsa State.

“Our operatives also conducted searches in some  houses on the estate based on tip off on the  ex-minister.

“We will follow due process in invoking the relevant laws on asset forfeiture on all the mansions in the estate.”

Section 7 of the EFCC Act says: “The commission has power to (a) cause any investigations to be conducted as to whether any person, corporate body or organization has committed any offence under this Act or other law relating to economic and financial crimes.

“(b) Cause investigations to be conducted into the properties of any person if it appears to the commission that the person’s lifestyle and extent of the properties are not justified by his source of income.”

Sections 26 and 29 of the EFCC Act read in part:  “Any property subject to forfeiture under this Act may be seized by the commission in the following circumstances- (a) the seizure is incidental to an arrest or search; or (b) in the case of property liable to forfeiture upon process issued by the Court following an application made by the Commission in accordance with the prescribed rules

“Properties taken or detained under this section shall be deemed to be in custody of the Commission, subject only to an order of a Court.”

Sections 28 and 34 of the EFCC (Establishment Act) 2004 and Section 13(1) of the Federal High Court Act, 2004 empower the anti-graft agency to invoke Interim Assets Forfeiture Clause.

“Section 28 of the EFCC Act reads: ‘Where a person is arrested for an offence under this Act, the Commission shall immediately trace and attach all the assets and properties of the person acquired as a result of such economic or financial crime and shall thereafter cause to be obtained an interim attachment order from the Court.’

Section 13 of the Federal High Court Act reads in part : “The Court may grant an injunction or appoint a receiver by an interlocutory order in all cases in which it appears to the Court to be just or convenient so to do.

(2) “Any such order may be made either unconditionally or on such terms and conditions as the Court thinks just.”

On the EFCC boss, Magu’s trip to   London,a second source said: “We are getting closer to the biggest fraud trial in the UK. The Acting EFCC chairman has left Abuja for London to compare notes with his colleagues.

“The EFCC is collaborating with prosecutors in the United Kingdom by providing incontrovertible evidence against the ex-minister.

“Some of the UK investigators visited Nigeria in 2016. A few of our crack detectives have been in and out of the UK too.

“Magu’s trip is part of the crystallization and consolidation of evidence against Diezani.”

It was also gathered yesterday that about five bank chiefs may face trial in connection with looted funds traced to ex-Minister Diezani.

“Although we are presently preoccupied with the recovery of looted public funds by the ex-minister, we cannot rule out the prosecution of some people at the end of the day,” a source told The Nation yesterday.

“Some bank chiefs, maybe about five, may face trial but we are not making this a priority now. We want to retrieve every dollar stolen from NNPC accounts.

“Some of these bank chiefs are pleading that we should allow them to refund the funds credited to them without prosecution. But the weight of evidence will determine our position at the end of the day.

“The truth is that many bank chiefs were engaged by the ex-minister to perpetrate fraud.

“So far, all the banks implicated are cooperating with the EFCC. We hope that in two weeks’ time, the $153million would have been forfeited to the Federal Government.

The EFCC told a Federal High Court in Lagos on Friday that the huge cash was wired from NNPC accounts to Fidelity Bank before it was given to Sterling Bank , Access Bank Plc, First Bank Plc and Fidelity Bank Plc for safe keeping.

EFCC said the banks “aided and abetted the massive fraud perpetrated by the minister.”

Access Bank is holding $5million out of the total sum.

A witch saved me from death -Pastor E.A Adeboye