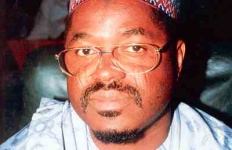 A former governor of Niger State Abdulkadir Kure, has died.  He died at the age of 60.

As a member of the ruling People’s Democratic Party (PDP), he was governor of Niger state from 1999 to 2007.

In May 2000, he introduced Sharia law in Niger State making him one of the few northern Governors to introduce shariah legal system in their states.

They have two daughters and four sons.