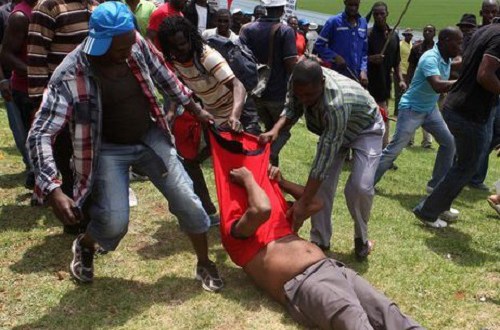 TVC N. An inter-ethnic clash in Gariki Market in Enugu state has resulted in the death of two people which also

resulted in the burning of a mosque.

Vanguard reports that the duo who died was one Ali, a Fulani man and Ifeanyi Ifeacho who is an Igbo man.

There he asked Ifeanyi who worked as an attendant to slaughter the cow and subsequently paid N400 instead of the N500 that was charged in the market.

It was reported that Ifeanyi had asked for the rest of the money but the Fulani man refused and it degenerated into a heated fight.

Ali subsequently pulled out a dagger and stabbed the Igbo man repeatedly until he slumped and died. Ali reportedly tried to flee but was intercepted by traders who beat him to death. Later angry Igbo people regrouped and set fire to mosque inside Gariki Market.

The police spokesperson said: “Two persons were confirmed dead yesterday in the course of a clash between an easterner and a northerner over an alleged misunderstanding that arose between them at Gariki Awkunanaw market.”

Normalcy was returned to the market following the deployment of anti-riot police.