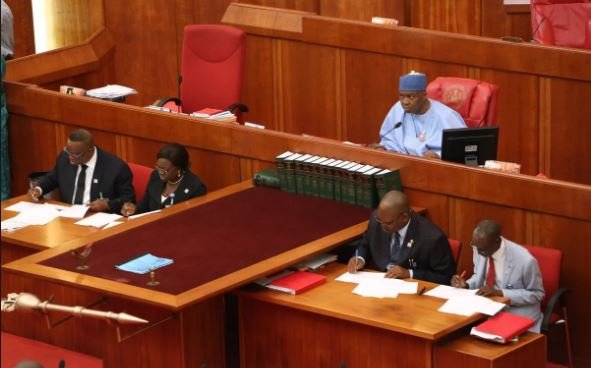 The confirmation finally put an end to weeks of antagonism towards the president’s requests. But even though the Senate confirmed 47 career ambassadorial nominees of the president, it rejected nominations of the 46 non-career diplomats to represent Nigeria abroad on Wednesday, November 16.

According to the Senate, the president’s request list was rejected because of over 250 petitions against them.But just like the case of 46 non-career diplomats, the Senate also rejected two of Buhari’s seven nominees to fill vacant positions on the board of NCC, the telecommunications regulatory agency.

At Thursday’s plenary session, the Senate confirmed five nominees, out of seven forwarded by Buhari Septuagenarian Olabiyi Durojaiye, Ogun state, was confirmed as chairman of the commission, while Sunday Dare, Oyo state, was confirmed as the Executive Commissioner (Stakeholder Management). Brushing aside his concerns over his advanced age, the Senate committee, in approving Mr. Durojaiye, born in 1933, stated that, “(he) is a person of unquestionable character who possesses the professional background, personal traits and academic competence required to serve as the Chairman of the Governing Council of the Nigerian Communications Commission.”

The three others who were confirmed were Ifeanyi Ararume, Imo state; Clement Obaiye, Kogi state; and Okoi Obono-Obla, Cross River. Obono-Obla is currently Buhari’s special assistant on prosecutions attached to the Ministry of Justice. However, the two whose nominations were not recommended for confirmation were Aliyu Abubakar, Bauchi state; and Ezekiel Yissa, Kwara state.

It has been difficult to fight corruption – Buhari