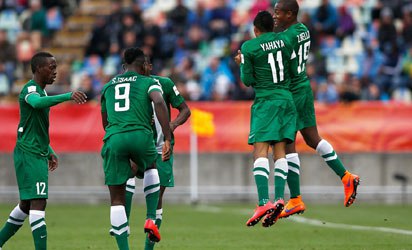 Nigeria’s U20s team, Flying Eagles suffered the worst ever defeat by a Nigerian youth team when they were battered 8-1 by England U20s in their opening game at the Suwon Continental Cup on Wednesday morning.

The Young Lions opened scoring against the Manu Garba-led side in the 19th minute through Taylor Moore, before a brace from Adam Armstrong and a Dominic Solanke goal put them 4-0 up, but Nigeria managed to pull a goal back nine minutes before the end of the first half.

Two minutes out of intermission, Callum Connolly and Patrick Roberts registered their names on the scorecard for England U20s to increase the lead to 6-1.

Adam Armstrong bagged his hat-trick in the 70th minute and Roberts scored again with two minutes remaining to bring the scoreline to 8-1.

Next up for Nigeria in the competition is a game against Iran before they wrap up group play against hosts South Korea.