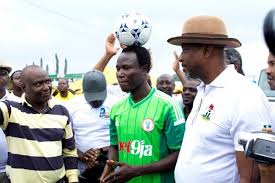 with the ball balanced on the head, Chinedu Harrison is set to break another world record.

This time he wants to set the record for the longest distance covered riding a bicycle with the ball balanced on his head.

Chinedu had walked from the Redemtion Camp in Mowe Ogun State to the National Stadium in Lagos, a distance of 48.04 kilometres in six hours, 15 minutes with the ball on his head, to beat the old mark held by an Indian, Naib Singh.

To make the new record of the ball on his head while riding a bicycle the ball joggler intends to ride from Akodo in Ibeju Lekki to the National Stadium in Surulere, a distance of about 100 kilometres.

The world record day will hold on November 20th.