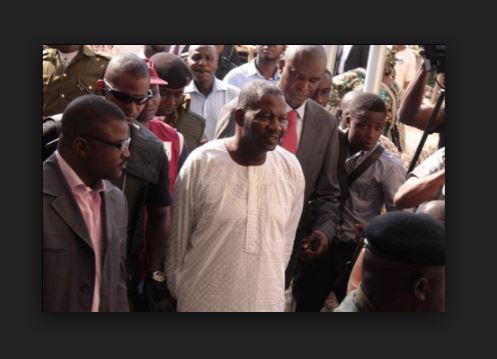 TVC N. The National Drug Law and Enforcement Agency has said that its operatives did not subject popular actor, Babatunde Omidina, to physical torture during the period he was incarcerated by the agency for allegedly being in possession of hard drugs

The Head, Public Affairs of the NDLEA, Mr, Mitchell Ofoyeju, in an interview with our correspondent on Thursday, reacted to an allegation by Nollywood actor, Yomi Fabiyi, that Baba Suwe’s health had deteriorated due to torture at the agency.

Fabiyi had, in a statement posted on Instagram on Wednesday, claimed that Baba Suwe told him that he could no longer walk properly because a pipe was inserted in his anus during the period that he was detained by the NDLEA.

“He told me that he could no longer feel comfortable since that episode. Baba Suwe can hardly walk properly as I speak, let alone go to film. How will he feed and take care of the children that Aunty Moladun left behind?

“He told me when I visited him that he was innocent and a long pipe was inserted in his anus. He was detained for too long, among other things, just because he was randomly suspected like every normal person.

“Torture is criminal and sinful. If this accusation is found to be true by independent investigators, it shouldn’t go unpunished,” he had said.

But Ofoyeju dismissed the actor’s claims as false, saying, “The NDLEA did not torture Baba Suwe. If he was tortured, he would have said it himself.  This is just an unfounded rumour on the social media and it should be disregarded.

“As a matter of fact, Baba Suwe was given the best treatment. We treated him with due regard to the requirement of fundamental human rights globally. He was talking to his relatives and lawyer. He was never kept in a prison for the period that he stayed here because he was virtually under our observation.”

Also, regarding Fabiyi’s claim that the NDLEA failed to obey a court order to pay Baba Suwe the sum of  N25m in damages, the spokesman said that the agency was not obliged to obey the order since a substantive ruling by the Court of Appeal had directed  it not to pay the actor.

“If Baba Suwe had gone to the Supreme Court, perhaps his case would have been upheld. But he did not do so,” Ofoyeju said.

When contacted, Baba Suwe told our correspondent on telephone that he was not disposed to speaking on the issue.