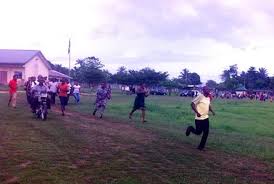 Nduh made the confirmation while addressing Journalists at INEC office in Ekpoma Adetunji Adeteye from TVC News confirmed this too.

The INEC Electoral Officer however, said that the election was peaceful at the various polling centres,“ except in ward 7 unit 11, where hoodlums snatched a ballot box”.

“The hoodlums couldn’t lay their hands on the result sheets which were saved by the presiding officer, but as I speak with you, there is no result from there,” he said.

The electoral officer said although INEC officials experienced some hitches with the card readers, “the faulty machines were immediately replaced with functional ones’’.

Atiku backs Tinubu, says party should play by the rules