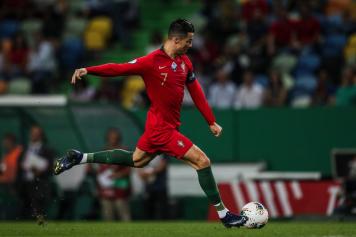 Ronaldo is one goal from 700

Ronaldo is one goal from 700

Juventus forward, Cristiano Ronaldo, is now one goal away from scoring 700 career goals following his goal in Portugal’s 3-0 victory over Luxembourg in a Euro 2020 qualifying match.

Manchester City midfielder, Bernado Silva and Valencia forward, Goncalo Guedes are the other goal scorers of the night.

Portugal remain second in Group B, five points behind Ukraine, but four points clear of Serbia in third.

Ronaldo will have the chance to become just the sixth person to score 700 goals when Portugal travel to Ukraine on Monday.