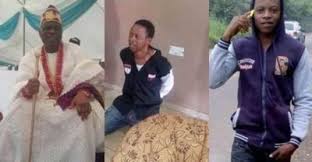 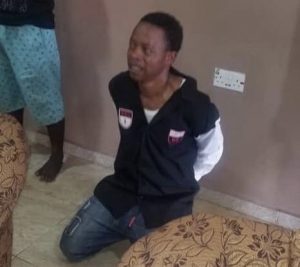 The cook who allegedly murdered his master, a Lagos businessman, Ope Bademosi in the early hours of Wednesday, at his Onikoyi Lane, Parkview Estate has been arrested by the Ondo State Police Command.

The suspect’s picture identified as Sunday was handed over to security agencies in order to identify and track him at the nations’s borders.

Sunday was alleged to have run away after committing the deadly act.

The police thereafter declared him wanted.

The State Police Public Relations Officer, Mr. Femi Joseph, confirmed the arrest and said the suspect would be paraded today at the headquarters of the command.

A neighbour of the deceased, who didn’t want to be named recounts “I heard a scream from the wife, so I ran outside to their flat and saw her screaming outside with people holding her as she said that her husband had been murdered.

“When we got inside, we saw the man in a pool of blood with the volume of music increased to the highest level.

“Already we had called the attention of the estate police before going in and they arrived just on time. According to the wife, she said she left her husband very early this morning to do some transactions in the bank. On her way back, she called her husband and couldn’t hear what he was saying as his words were barely cohesive, and was just muttering words before the call dropped.

“She attempted to call him back but he wasn’t picking up his phone. On getting home, the security was still asleep and couldn’t even respond to her car horns till she got down from her car, to bang on the security’s window; that was when the security eventually woke up to open the gate for her. But unfortunately, on entering, she met her husband lying in a pool of his own blood and couldn’t find the cook who just resumed work on Sunday anywhere.

“That was when she screamed out for help and sent the security to help her run to see if he can still apprehend the cook. Perhaps because of fear, the security who was just employed on Sunday as well, also took to his heels upon the news that his new boss had been murdered.”

A former security guard at the apartment, said he was sacked from his job after working for just a month with no reasons given to him and was paid off by the deceased on the eve of the incident.

“I just returned from police questioning. I was the one guiding that house before. That oga is a very nice man. When I resumed work, I realised that there wasn’t a manifest where security can keep record of any visitor that comes around. So I developed that,” adding that he realised that immediately he started doing that, he began to have problem in the house, consequently leading to his sack.

He said it was on Sunday, “I realised that they have employed new cook and security man when I went there to carry my fan. And yesterday (Tuesday) evening, Oga (the deceased) called me to come and collect my salary, which I went and I saw him. He was hale and hearty.”