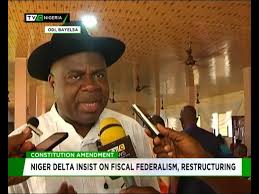 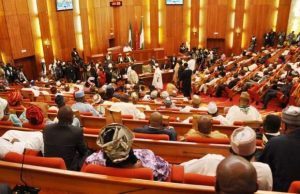 The Senate’s decision on devolution of powers, the land use act and restructuring seems not to be going down well with opinion leaders in the Niger Delta.

At a public lecture in Odi, Bayelsa state, National and State Assembly members restated their call on the Federal government and to consider equity, and fairness, in the constitution amendment process.

TVC News Correspondent, Ovieteme George reports that the Nigerian Senate on the 26th of July, took some decisions on calls for restructuring and devolution of powers making headlines on some
national newspapers.

Federal and State lawmakers from Bayelsa attending this public lecture in Odi, Kolokuma/Opokuma Council Area of Bayelsa State are unhappy with the National Assembly’s position on the matter.

Some are not shifting grounds in the call for fiscal federalism, while others are emphasizing the role of dialogue in settling disagreements.

The major topic of the public lecture is “The Role Of Odi; Social Economic, Political And Peace Building in Bayelsa, Niger Delta and Nigeria”.