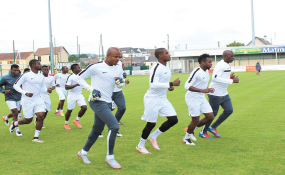 Premier league stars, Alex Iwobi and Ola Aina have arrived at the Super Eagles’ Paris camp ahead of Thursday’s friendly game between Nigeria and Togo.

The arrival of the duo has taken the number of super eagles players in camp to 19.

Manchester City forward, Kelechi Iheanacho who scored the Eagles’ equaliser against Corsica last Friday, is still expected back in camp after leaving for London to complete his move to West Ham United.

Coach Gernot Rohr will name a new squad for the 2019 Afcon qualifier against South Africa after the friendly.

Meanwhile, The Nigeria Football Federation (NFF) has dismissed insinuations that the results of the Super Eagles friendly games against Senegal and Corsica were pre-determined before the teams stepped onto the pitch.

The team Media Officer, Toyin Ibitoye says there was not much at stake in the games to warrant match fixing.

He says the matches were organised just to give Rohr the opportunity to assess the new players in the team.