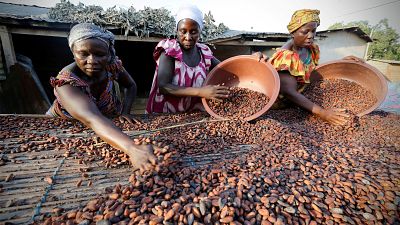 Ivory Coast slashed the price it guarantees for cocoa farmers by 36 percent to 700 CFA francs ($1.14) per kilogram on Thursday and reduced taxes for the April-to-September mid-crop amid a sharp drop in world prices.

The world’s top producer sells forward the bulk of its anticipated harvest to be able to set a minimum price for farmers. The price was fixed at 1,100 CFA francs/kg at the start of the current season in October.

However, futures prices on markets in London and New York have since plummeted following bumper crops in most of the world’s cocoa producers.

The government will also waive a 5 percent registration tax paid by exporters and reduce several smaller levies for the mid-crop, reinjecting 43.5 billion CFA francs ($71 million) that would have gone to government coffers into the marketing system.

Higher than expected output and a wave of export contract defaults have created a glut of beans in Ivory Coast and frustrated farmers who have struggled to find buyers.

The crisis forced the Coffee and Cocoa Council (CCC) marketing board to sell 350,000 tonnes of beans in spot auctions, sales which it was obliged to support with its reserve funds.

CCC head Massandje Toure-Litse said on Thursday that Ivory Coast must in future play a bigger role in the marketing of its cocoa.

“Ivory Coast must be involved in the marketing of cocoa like it’s done in Ghana,” she said. “Ivory Coast and Ghana are going to get together very soon to find solutions to the drastic price drop.”