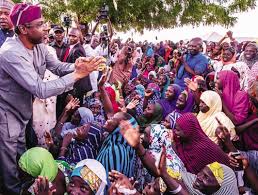 Speaker of the House of representatives, Femi Gbajabiamila, has expressed support for states affected by banditry and kidnapping. This he intends to achieve through budgetary consideration for the states in infrastructural development and sustenance of their rehabilitation programmes.

Abdullatif Yusuf reports that the Speaker’s visit was an opportunity for the dignitaries to look in-depth at the issue of insecurity and ways of overcoming it.

The speaker house of representative explained that the legislative arm will go beyond delbrations this time around to complement what the states are doing in the areas of security and welfare.

Despite the gradual return of normalcy in the parts of the state affected by the problem of insecurity, Katsina state will need a lot of interventions to sustain the peace and rehabilitation programme for its people.

Governor Aminu Bello Masari explained factors responsible for the involvement of Fulani herdsmen in crimes and sought the cooperation of
the house leadership in resolving some of the issues.

The governor also stressed the need for proper legislation on border and forestry’s laws.

The speaker also took time to commemorate world teachers day at government day secondary school Kofar Saudi in Katsina and donated drugs
and food items worth millions of naira to an IDP camp in the state.

The working visit to Katsina state provided the legislature the chance to see for themselves the true picture of the situation at hand and
expectations are that it will prompt the lawmakers to do something tangible to bring immediate relief to the people.