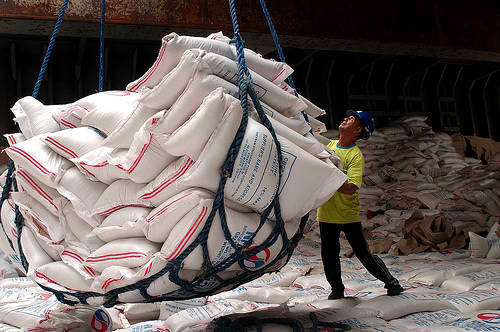 TVC N. Mr Mike Omeri, the former Director General, National Orientation Agency (NOA), has advised the Federal Government to enforce the ban on importation of rice in phases to boost local production. Omeri said this to journalists on Sunday in Abuja.

According to him, what government needs to do is not an outright ban, but we should reduce the ban according to the level of production. “If we are able to produce 10,000 tonnes and we are importing 20,000, let us cut off the 10,000 and bring in the other 10,000 tonnes so that we do not go hungry.

“So they let us look at the nutritional value and begin to patronise made in Nigeria rice. Let us do phase withdrawal of importation of rice in this country so that our people can grow more. “We should also ensure that any rice that is imported must be competitive with the local rice, otherwise there is no need to bring it,” Omeri said. He said that policies relating to agriculture in the country have been result-oriented, adding that policies on agriculture did not just start from the present administration.

According to him, the policies started from previous ones; today, “we are seeing revolutions in Anambra, Nasarawa, Kebbi with rice everywhere. He said that Nigeria did not need rice that would undermine the country’s growth process or the one that would protect the imported rice. “After all, our rice is more organic, fresher directly from the farm and doesn’t have to go through the seas.

On Customs, Omeri said that the reforms taking place in the service were the repositioning of the system to conform to unfolding international standards. Omeri said that there were things being done right in the Nigeria Customs Service that were not right enough. “So what we are witnessing now is an attempt to ensure that we conform to the provisions of Nigeria Customs Service and the rules of our country and that Customs serves the best interest of Nigerians.