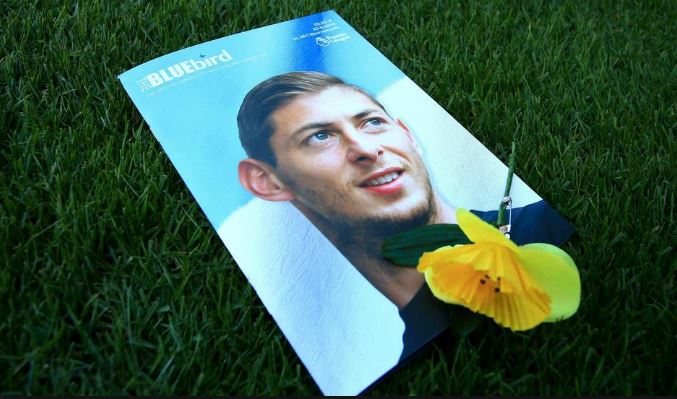 Cardiff striker, Sala’s wake and burial has been held on Saturday with mourners, including his father, Horacio, paying their final respects to Cardiff City striker Emiliano Sala in his native home of Progreso in Argentina.

The 28-year-old died when the plane he was in with pilot David Ibbotson crashed in the English Channel en route from Nantes to Cardiff on 21 January.

The wake was held at the club Sala played for as a youth in his hometown of Progreso before the funeral started later on Saturday.

Among those who attended was Cardiff City manager Neil Warnock.

“I would like to find a responsible person…someone who says to me: ‘this happened’; but, well, it seems this was just an accident,” said Sala’s aunt Mirta Taffarel.

His body, which was recovered from the wreckage following a privately-funded search last week, was repatriated to Argentina on Friday.

It was then driven from Buenos Aires to the Sante Fe province, where Sala grew up.

Ahead of the service, the club posted a message on social media saying: “We are waiting for you … like the first day you left but this time to stay with us forever. Eternally in our hearts.”

As well as Cardiff’s delegation of Warnock and chief executive Ken Choo, Sala’s former club FC Nantes has been represented by defender Nicolas Pallois and its general secretary.

Warnock said: “He’s my player. He signed for me I think he was going to be very instrumental in what we were looking to do and I feel it’s the only good thing you can do.

“Family puts it in perspective. Family is so important, everything here today has shown how important it is…it seems like the whole village has got together.”

“Today I think it’s good for the family to have some closure.”

Sala’s mother Mercedes and sister Romina, who travelled to Europe after his disappearance, have returned to Progreso.

Meanwhile, a campaign to raise funds to find the body of Mr Ibbotson has reached £240,000.

Sala was born in Santa Fe, Argentina – but it was in France that he forged his reputation.

Among the top five goalscorers in Ligue 1 this season, Sala netted 12 times at better than a goal every two games.

That prompted Cardiff to pay Nantes a club record £15m for a man who spent his entire professional career in the French leagues.

Sala was born on 31 October 1990 in the small rural community of Cululu in the Santa Fe province, about 340 miles north west of Buenos Aires.

After progressing through the youth set-up at Argentine side Club Proyecto Crecer, he moved to France to sign for Bordeaux.

But, after making his debut as a 21-year-old, he struggled for game time and a series of loan moves followed.

When he took that goalscoring form into a loan spell with Caen in 2015, Nantes had seen enough – and bought the 6ft 3in striker for a reported one million euros.

Three and a half years – and 42 goals later – came Premier League interest.

West Ham, Everton, Leicester, Crystal Palace, Fulham and Southampton were all linked with Sala, but it was Cardiff who got their man – eclipsing the £11m they paid for Gary Medel to sign him.

When his signing was announced, Sala said: “It gives me great pleasure and I can’t wait to start training, meet my new team-mates and get down to work.”

In a later tweet, he wrote: “I know the challenge is big, but together we will make it.”