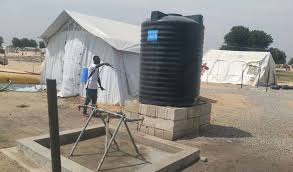 The Borno state Government has directed the upgrading and fixing of all existing water facilities in the Maiduguri metropolis as parts of its determination to eradicate the problem of water scarcity within Maiduguri and Jere local council.

Our Correspondent reports that the water facility has been on the drawing board since 1999, until International committee of the Red cross stepped in and partnered with the state government to complete the project within a year.

The facility is equipped with 10 boreholes and has a discharge capacity of 9 million liters of water daily. It serves about 100,000 beneficiaries.

Officials of the international committee of the Red Cross took the Governor through their operations in managing the Dala water facility and he showed his appreciation at the efforts to improving the lives of the residents of borno state.

The governor’s entourage also inspected the dilapidated water infrastructures in Jiddari Polo and the governor ordered immediate upgrading of the present system.

One of the residents of the community,   Adamu Abubakar who spoke in Haua language, said “we now have an educated Governor that shows concern about the plight Of The poor man. We still have other serious issues affecting us in this area.The Roads are bad especially during the rainy season now. We hope he gives us good Road network in our area. That will greatly solve most of our problems”.

Also, Halima Mustapha, another resident, said ” we have been facing difficulties of water supply and it is due to the lack of electricity supply. It affects the distribution of the water in this area. If power is provided then our problems are solved” .

The residents considered this visit by the Governor as timely. They expressed hopes that he would take immediate steps to cushion the hardship they have faced with water supply for a long time.

Chibok schoolgirls: Pause as a parent, to imagine 2,549 days of pains