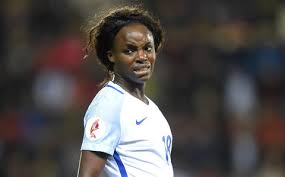 Speaking with the BBC, Aluko claims Coach Sampson dropped her from the team just days after she made allegations against the Coach.

The Chelsea ladies striker who has played for England 102 times and has scored 33 times for the Lionesses claims the England women’s Coach had made racist remarks relating to her family in Nigeria being infected with the Ebola virus.

She is the elder to Super Eagles Fulham forward, Sone Aluko.

Last year, a three-month independent investigation cleared Sampson and the FA of any wrongdoing.