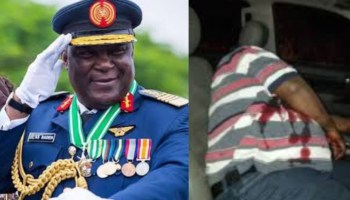 A police source revealed that the two suspects were directly involved in the attack, that led to the death of the former Defence Chief.

The suspects will be paraded at the headquarters of the Nigeria Police Force in Abuja tomorrow.

The arrest came, one week after the former Defence Chief was killed by gunmen, while returning from his farm, along Abuja-Keffi Road.

Badeh served as the 18th Chief of Air Staff until his appointment as Chief of Defence Staff by former President Goodluck Jonathan in January 2014 and retired a year after.