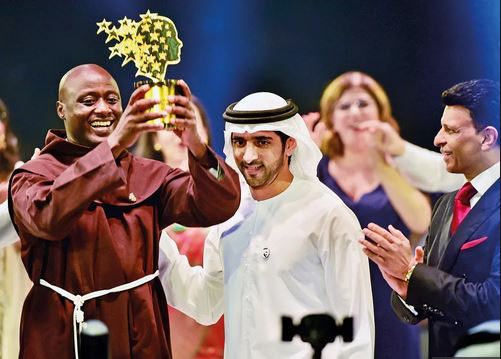 Thirty six year old Peter Tabichi has emerged the winner of the 2019 Global Teacher Prize, a prize worth one million dollars initiated by the Varkey Foundation to reward teachers for their efforts across the globe.

TVC News Anchor, Bukola Samuel-Wemimo reports that the atmosphere was one of jubilation when the winner was announced.

The first part of the Global Teacher Prize ceremony was closed to the press because copy right protection for the performance of Australian multiple award winning  Actor and singer, Hugh Jackman.

The did not deter well wishers, mostly Africans who took to the exalted platform to celebrate what they consider a shared achievement  ceremony of the Global Education and Skills Forum which features.

36 year old Peter Tabichi is a science teacher who devotes 80percent of his income to help children in Kibera Kenya, get an education.

His students at Keriko secondary school Kenya have gone on to win national awards. Tabichi speaks about the significance of the award.