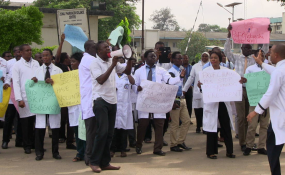 Nigeria’s Minister of Health, Isaac Adewole, says heads of federal government hospitals should ensure that all other medical doctors are available to fill the vacuum created by the striking National Association of Resident Doctors, NARD, on Monday.

These include consultants and Youth Corps doctors as well as doctors on internship.

Resident doctors embarked on a total and indefinite industrial action on Monday, in order to get the government to agree to their demands.

The doctors’ association wants an immediate payment of salary shortfalls experienced between January and May this year.

They are also asking the government to stop its plan to stall the promotion of resident doctors.

The strike could cripple services at the hospitals but the minister says his directive ensures that the provision of health services continue.

Adewole expresses optimism that the problem would be resolved soon as the warring parties are expected to meet again on Wednesday.