The National Leader of the All Progressives Congress, Bola Tinubu, has rejected allegations of meddling in the nomination process for the leadership of the ninth assembly, in order to position himself for a presidential run in the year 2023.

In a statement released by his media office, Bola Tinubu says all he has done is support the position of the APC and President Muhammadu Buhari, and he has no ulterior motives.

According to him, his mind, heart and efforts are focused on backing the party and president in achieving their shared vision of a flourishing economy.

He also dismissed the claim that having allies in national assembly leadership positions will enhance someone’s presidential ambitions.

The full statement titled “TINUBU FOCUSING ON THE ISSUES OF TODAY: TOMORROW IS THE MASTER OF ITSELF,” is as follows:

“We have monitored, with rising incredulity, the rash of news stories claiming Asiwaju Tinubu is manipulating the APC nomination process for the National Assembly leadership. The stories claim this supposed manipulation is the first salvo in Asiwaju’s effort to position himself for a presidential run during the 2023 election cycle. Not only are these reports utterly false, based as they are in the febrile imaginations of those persons by whom they are being peddled, they are injurious to President Buhari’s historic quest to reform Nigeria. It is for this latter reason that we find cause to speak out where otherwise we would have continued to watch on in silent amusement.

“Nigeria has barely emerged from President Buhari and the APC’s resounding victory in the last election. The President, with the support of an APC majority in both chambers of our National Assembly, is now preparing to lead the nation forward for the next four years. Instead of covering the President’s exciting Next Level agenda and what it promises in terms of economic and social growth & development, these people want to skip ahead to the next election as if they can cast aside the next four years.

“However, the Nigerian people do not elect politicians to office simply to watch on as they maneuver and jostle for position at the next election. The people elect those who they believe will be the best public servants, committed to the national wellbeing. This is why they reelected in President Buhari while rejecting the horde of political jobbers that constitute the PDP.

“The peddlers of these rumors have arrogated to themselves the preternatural ability to read Asiwaju’s mind more than he himself can know it. They also seem to have acquired the unique gift of bending time so that 2023 appears before we even reach the midway point of 2019. If these people would only enlist their uncanny talents in the service of the nation instead of in the service of political intrigue and gossip mongering our country would be much the better.

“This attempt to caricature Asiwaju as if his words and actions are all aimed at grabbing power will fail because this portrait distorts the plain truth. While the headlines are sensational they are also senseless because they are not grounded in fact. Asiwaju has not run for elected office since 2003. He last held office in 2007. He has never vied to become chairman of the APC nor has he tried to insinuate himself into any major government office.

“If you were asked to name another political figure who has exercised such forbearance, you would be hard pressed to identify another person with a comparable record when it comes to restraint in seeking office. Where others, upon leaving one office, tend to set their eyes immediately upon another, Asiwaju, uniquely in Nigerian politics, has foregone his personal ambitions as his political ideas and policies have flourished in the hands of his allies and mentees.

“This track record does not evince a man obsessed with power and office. While the intrigue-mongers seek to depict Asiwaju as a man hungering for position, his deeds speak of something else. These peddlers of tales do not know the measure of the man nor can they understand what motivates him. Thus, they project their own petty ambitions and designs on to him. The rumors reveal more about the mongers than they say about Asiwaju. They merely reveal what these people would do if they were Asiwaju. But they are not him and thankfully he is not motivated by the same selfish designs that fuel such people. Perhaps because these people have nothing to contribute regarding statecraft or providing actual solutions to actual problems, their minds remain forever mired in political machinations.

“What afflicts them does not affect Asiwaju. Since he last held public office, Asiwaju has, with unprecedented success, dedicated himself toward building a political party that would furnish a progressive alternative to the regressive policies of the PDP. Joining forces with President Buhari and others who shared his progressive ideology, he helped form the APC. Since the inception of the APC, Asiwaju’s focus has been to assist President Buhari develop, refine and implement a progressive agenda that would give every Nigerian a fair chance to prosper and provide for his loved ones.

“As he enters his second term, President Buhari has stated that he will give the economy special priority. His goal is to defeat poverty and joblessness while spurring the type of growth and development that will make Nigeria’s a durable and flourishing economy. These goals are laudable and necessary to move Nigeria forward. However, the obstacles before us are vast and complex. 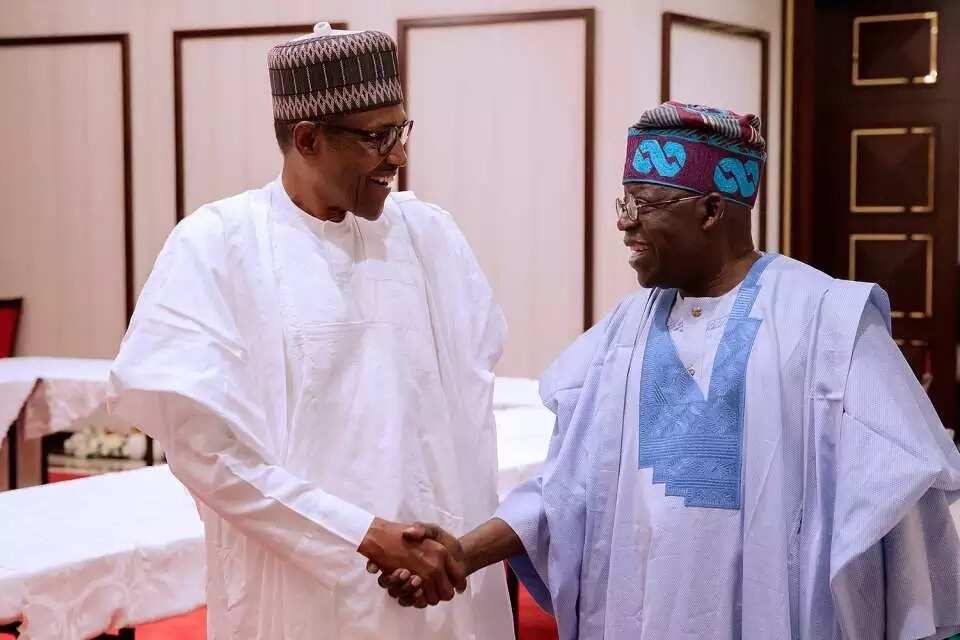 “Asiwaju’s mind, heart and efforts are focused on supporting the President in achieving their shared vision of a flourishing economy and a prosperous people. He is committed to doing what he can to help President Buhari surmount the challenges in order to achieve the economic reform the nation sorely needs. Given that the imperatives of today are sufficiently daunting in and of themselves, Asiwaju is neither inclined, nor sufficiently naïve, to take his eye off the present in the futile attempt to peer through the thick fog that is the future.

“It is against this backdrop that Asiwaju’s support of the party position regarding the National Assembly leadership must be interpreted. There is no surprise in him supporting the party and the president’s position regarding the National Assembly positions. Nor is it wrong that he do so. As a loyal party member and progressive leader, he would have committed a terrible wrong by navigating against the president and party in these matters.

“That Asiwaju has actively and publicly supported the party and president should not result in such public backbiting. We all know how important these positions are to the fulfillment of the president’s agenda. One need only look to the last four years to see how painfully this lesson has been learned. With the Senate leadership usurped by regressive elitists that chamber constituted a brake on progress and good governance. The Senate leadership, and to a lesser degree the House leadership, stymied APC legislative initiatives while attempting to hoist noxious, reactionary and self-interested legislation on the nation.

“Just look at the way Saraki, Dogara and their ilk highjacked the budget process these past four years.National budgets were delayed and distorted as these actors repeatedly sought to pad budgets with pet projects that would profit them. Even worse, they cut funds intended to prosper projects that would have benefitted the average person. After four years of their antics halting the progress of government, we should do all we can to prevent a repeat of their malign control of the National Assembly.

“If we are truly committed to optimal governance, then we also must be equally committed to ensuring that the National Assembly leadership be competent and experienced as well as imbued with a progressive mindset and a desire to work in close cooperation with executive. This is all Asiwaju has hoped to achieve. There are no ulterior motives. Everything he has done is in concert with and in furtherance of the wishes of President Buhari and the party.

“Thus, those who cast aspersions at Asiwaju, in reality are bucking against the stated position of the President. This is a democracy and people have the right to oppose whomever they wish to oppose. However, if these mongers oppose the president let them be of sufficient courage to plainly say so. They should not disparage Asiwaju as an indirect way to contend against the President.

“What everyone who cares about Nigeria should now do is rally around the president to give him all possible support in driving to reality his economic policies and objectives. This is how we progress as a nation.

“In the end, the rumor-mongers should court greater discipline and wisdom. As Asiwaju recently said there is no action a person can take that constitutes a political guarantee as to what may come four years from now.Moreover, that having allies in the national assembly leadership positions will greatly enhance someone’s presidential ambitions is a spurious claim.

“In 2015, Senator Saraki finagled his way into the senate presidency. He planted himself at the apex of legislative power. But his actions as Senate president showed a man devoid of compassion for the average Nigerian. All he cared for was power and position. Soon he will be deprived of both. House Speaker Dogara has fared only slightly better. Occupying these positions is not a guarantee of future success. It is only a guarantee of present duty.

“Politics requires jockeying and maneuvering for influenceto get the right people in the right positions. To be beneficial, politics must be tied to the greater purpose of governance such as with President Buhari’s goal to reform the national economy for the good of all Nigerians. In supporting the party and the president, Asiwaju has shown his commitment to achieving the President’s goals. Nothing more should be read into it.

“Elections are over. Now is the time for governance to take primacy. Those who have taken to intrigue about 2023 reveal themselves to be lacking in essential concern for the people and the substantive issues that confront us. Our challenges are steep and multiple. Resolving them will occupy all of our time and energy. We do not have the luxury to embark on fantasies about the future. Let the future stay where it is for now. In due time, it shall come and shall decide the shape it is to take regardless of the plans we mortals hold for it.

“As for Asiwaju, he lives in the here and now. His words and deeds are geared toward perfecting progressive governance and resolving the substantive issues of today. Nothing more, nothing less. Those so enamored with gossiping about him, would do themselves and the nation well if they would follow his more productive example”.

House of Reps begins probe of MDAs’ capital projects since 2015