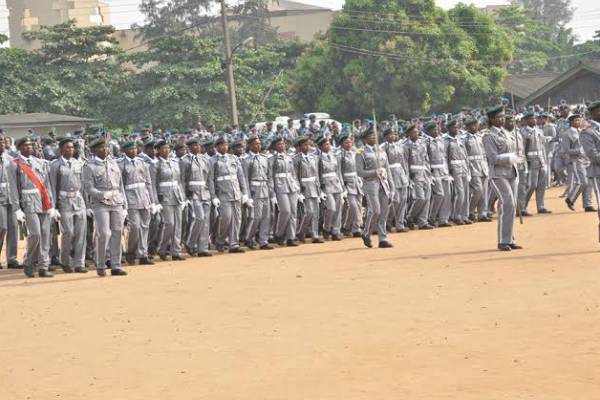 Rank and File of Nigerian Customs Service Personnekl on Parade

Suspected smugglers at the early hours of hours of Friday have attacked a Nigerian Customs Service (NCS) team around Oke-Odo, in Lagos State, fleeing with a service rifle and a vehicle laden with confiscated rice.

The smugglers, said to have outnumbered the Customs officials, ambushed the operatives while on their way to their office at Ikeja to drop the seized contrabands.https://www.tvcnews.tv/purplegold/post-new.php#

It was gathered that the operatives had conducted an early hour operation where they intercepted and seized several bags of smuggled rice in the area.

After the operation, one armed operative and a driver were said to have been directed to take the recovered items to NCS Ikeja but were overpowered by the smugglers who allegedly regrouped and ambushed them.

“An officer was seriously injured and the smugglers went away with the vehicle containing the seized contraband rice.

“They also went away with an officer’s Service Rifle.

https://www.tvcnews.tv/purplegold/post-new.php#The Customs officers who fled from the ambuish by the smugglers came back with soldiers but to their shock, their vehicle was no longer there,” according to siources.

https://www.tvcnews.tv/purplegold/post-new.php#Long and Short grain Parboiled Rice is on the Federal Government’s list of items banned for importation.

The rationale behind the ban according to the Federal Government is to ensure the sustainability and profitability for Local growers and Millers of Rice.

It is also a measure to conserve and safe scrace foreign exchange which can be channeled to Other uses.

The Land border between Nigeria and the Benin Republic was recently re-opened after over two years of closuer due to smuggling ativities which was affecting the Nigerian Economy negatively according to Government Statistics.