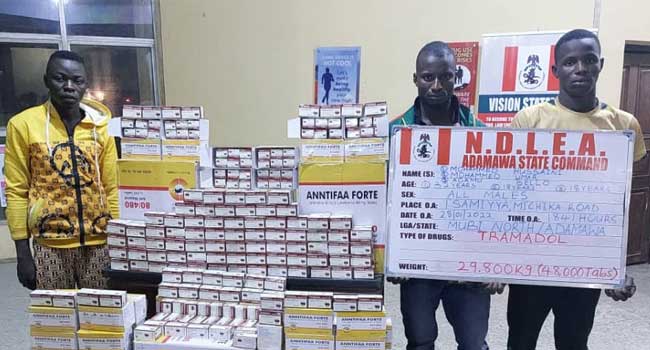 The National Drug Law Enforcement Agency has arrested three trans-border drug traffickers trying to smuggle 48,000 tablets of Tramadol through Mubi, Adamawa state to Cameroon.The suspects were arrested with the exhibits concealed in the packets of another drug. They claimed the drugs were to be delivered to some Cameroonians for onward delivery to Maroa.

In a similar operation at Alaba Rago area of Lagos, operatives of the NDLEA intercepted 1,200 parcels of a strong variant of cannabis suspected to have been smuggled into the state from a neighbouring country with a total weight of 1,229 kilograms.

At the Murtala Muhammed International Airport, Ikeja Lagos, operatives also intercepted a consignment of 22 international passports of six different countries concealed in a bag of cassava flakes known as Garri among other food items.

Bank of England warns inflation could rise to 6% by April