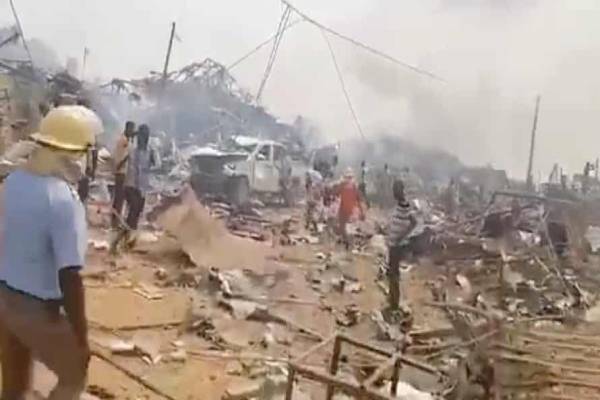 Scene of Explosion in Ghana

Many people were feared dead in an explosion in Bogoso, a town in western Ghana on Thursday evening.

Efforts to rescue injured persons are still on on Friday afternoon.

According to local authorities, the explosion occurred when a mining truck carrying explosives for a gold mine collided with a motorcycle.

“A total of 17 people have unfortunately been confirmed dead, and 59 injured people have been rescued,” Information Minister Kojo Oppong Nkrumah said in a statement released overnight.

Ghana’s President Nana Akufo-Addo in a series of tweets described the development as a “truly sad, unfortunate and tragic incident”.

He said: “I have just received a briefing on the circumstances that led to an explosion in Apiate near Bogoso, in the Western Region, resulting in the loss of lives and the destruction of properties belonging to residents,” the president said.

“It is a truly sad, unfortunate and tragic incident, and I extend, on behalf of the government, deep condolences to the families of the deceased, and I wish the injured a speedy recovery.

“The Police, Armed Forces and the National Disaster Management Organisation (NADMO) are coordinating efforts to contain the situation, and I have also instructed NADMO to see to it that rapid relief is brought to residents of the town.