The Academic Staff Union of Universities is asking well meaning Nigerians to prevail on the federal government to honour agreement it reach with the union or else they will be forced to withdraw their services.

At the end of the Ibadan zonal meeting of ASUU at the University of Ilorin, the Ibadan zonal coordinator of ASUU, Professor Oyebamiji Oyegoke said the union has been pushed to the wall over the non implementation of the Memorandum of Action reached with the government. 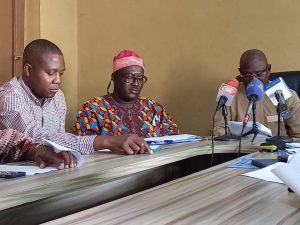 The Memorandum of Action signed with the federal government last year is yet to be fully implemented and this is why ASUU is gearing up for another strike.

The contentious issues that the Memorandum of Action was supposed to address are: revitalization of public universities, full payment of academic earned allowance, withheld salaries and promotion arrears, inconsistencies in IPPIS payment and renegotiation of the 2009 agreement.

Professor Oyegoke disclosed that the union will be left with ko other option than to go on strike again if nothing is done about he agreement.