Draws for the quarterfinal stage of the UEFA Champions League have been confirmed with defending Champions Bayern Munich drawn against last season’s finalist, Paris Saint Germain.

In a repeat of last year’s final, Bayern will take on the French Champions who knocked out Spanish Giants, Barcelona in the round of 16.

Premier League Leaders, Manchester city are up against Borussia Dortmund, While Chelsea are drawn against FC Porto. 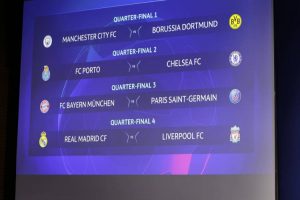 First leg Quarter final matches will hold between the 6th and 7th of April, with second leg games a week later. This season’s final will hold in Istanbul, Turkey on the 29th of May.

In the Europa League, Manchester United who are now the overwhelming favourite have been drawn against Spanish side, Granada in the quarter finals while Arsenal will play Slavia Prague.

Croatian Giant Killers, Dinamo Zagreb are up against Villareal while two European giants, AS Roma and Ajax face off.

The Europa league final has been scheduled to hold in the polish city of Gdansk.