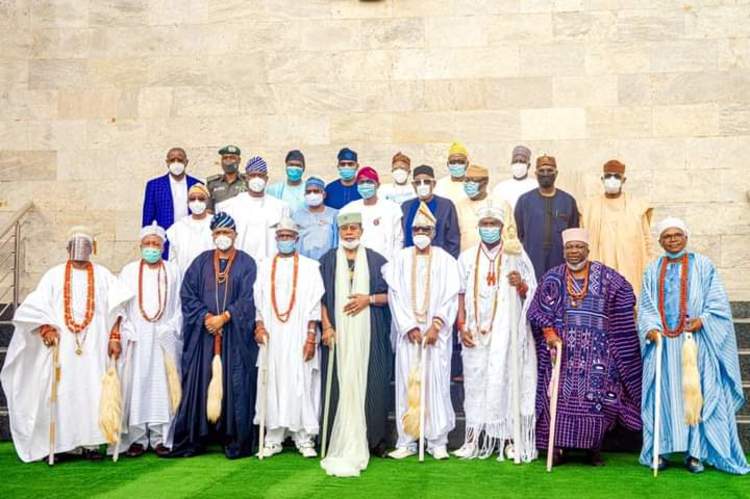 The Federal Government has said that to stop youth restiveness and channel their energies to useful ventures, there was need to equip them with skills and vocational training.

The Chief of Staff to the President Muhammadu Buhari, Prof. Ibrahim Gambari disclosed this at the parley of Governors and Traditional Rulers in South West States as well as the Presidential delegation held at the Lagos State Governor’s office, Ikeja.

He attributed the recent EndSARS protest in the country to youth unemployment.

He noted that the Federal Government was committed to addressing the causes which included youth unemployment, insecurity, community policing among others.

While noting that the Federal Government was aware of the level of destruction caused by the protest in different parts of the country, Gambari, said the incident has compounded the economic woes of the nation, which had been adversely affected by Coronavirus.

In his welcome address, the Chairman of South West Governors’ Forum and Governor of Ondo State, Oluwarotimi Akeredolu, condemned the destruction of public and private properties in Lagos and other parts of the region.

He called for concerted efforts to address the problems to avoid a repeat.

The Oni of Ife, Oba Enitan Ogunwusi, advocated regular consultations between State governors, federal authorities and the traditional rulers, while the Alafin of Oyo, Oba Lamidi Adeyemi, attributed the recent EndSARS protest to youth unemployment, anger and hunger in the country.

In his remark, the Olu of Ilaro, Oba Kehinde Olugbenle, while calling for the implementation of the 2014 National Conference, stressed the need for the devolution of power to the states and the reopening of the borders to allow for economic activities in the communities.

A communique issued at the end of the meeting and signed by the Goverrnor of Ondo State, Oluwarotimi Akeredolu on behalf of other South West Governors and the Ooni of Ife on behalf of the traditional rulers, called for the review of reports of various constitutional conferences, including the 2014, especially, with reference to security, economy and equal treatment for all citizens.

It also called for the reopening of the nation’s borders to alleviate the suffering of people in the border communities and a comprehensive programme to address youth employment and empowerment.

The security architecture, according to the communique, should be adjusted to address threats, while the police should do more to protect lives and properties.

The meeting also said specific measures and proposals should be put in place to repair the damage done to the physical infrastructure and economic assets of the South West.

While admitting the genuine concerns in the initial EndSARS movement, the Governors and Traditional Rulers regretted that the protests were hijacked by criminals elements with ulterior and negative motives.

The stakeholders appreciated President Muhammadu Buhari for his responsiveness to the initial demands of the EndSARS demonstrators and subsequent handling of the aftermath of the protest.

Present at the meeting were Goverrnor Dapo Abiodun of Ogun, Kayode Fayemi of Ekiti, Seyi Makinde of Oyo, Oyetola of Osun and Oluwarotimi Akeredolu of Ondo State.

U.S return to WHO, Paris Agreement under Biden would be welcome- Australia