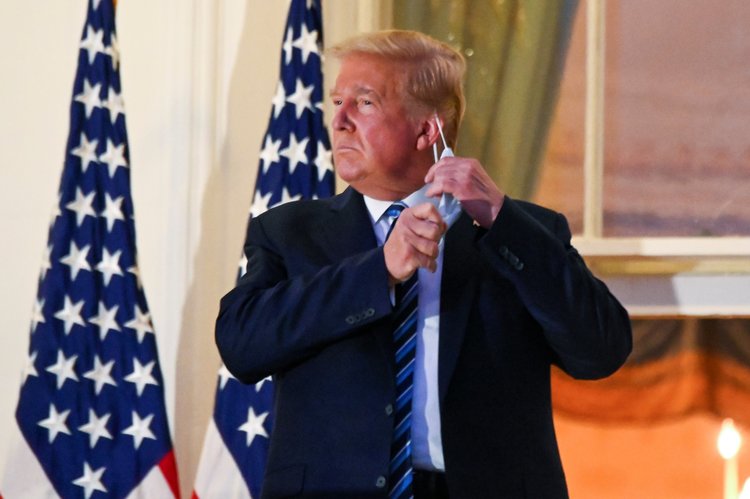 U.S. President Donald Trump is still in the contagious period and should remain conscious of that after being discharged from Walter Reed National Military Medical Center and returning to the White House on Monday evening. That’s according to a Critical Care Physician.

Donald Trump wore a mask as he left the helicopter that flew him back from a military hospital outside Washington and climbed the stairs of the White House South Portico, where he removed it and posed for pictures, waving, saluting and giving thumbs-up signs.

TV footage showed that he then turned to walk into the White House, his mask still in his pocket, .

Mr Trump has played down a disease has killed more than 1 million people worldwide and more than 209,000 in the United States alone – the highest death toll of any country.

He also mocked Biden at last Tuesday’s presidential debate for wearing a mask at events, even when he is far from others.

“Look, anybody who contracts the virus by essentially saying masks don’t matter, social distancing doesn’t matter, I think is is is responsible,” Biden told .

Shortly after his return, a video with thunderous orchestral music posted to his Twitter handle showed him arriving at the White House and saluting from the South Portico as Marine One flew off. The video was quickly viewed nearly a million times.

A Pulmonary and Critical Care physician said on an interview with CGTN that there’s always a chance that things take a turn for the worse and Trump will be taken back to Walter Reed.

“Generally speaking, the patient becomes not contagious 10 days after the beginning of the onset of symptoms so long as they don’t have symptoms of a fever within those 24 hours. So clearly he’s still in the contagious period and so, if he’s going to be around people, he needs to be cognizant of that and wear a mask. In the next few days for him doing well, continuing to do well, I think that’s probably the likely scenario but there’s always a chance that things could get worse, in which case he’ll be taken back to Walter Reed,” he said.

The president was given supplemental oxygen on Friday before being flown to hospital, and has since been receiving a series of drugs, including Remdesivir, a COVID-19 drug made by a U.S. biopharmaceutical company, and an experimental antibody cocktail being developed by U.S. drug maker Regeneron.

Doctors also confirmed Trump had been given a dose of dexamethasone, a steroid used to reduce inflammation.
, which seheult says is generally reserved for patients who are on oxygen and who have had pneumonia.

–”I noticed that his doctor, Dr. Conley, was a little evasive and said that his CT and x-ray findings were what was expected, so I’m assuming that they’re not normal and I believe that they’re probably looking at the data and saying that the benefits of steroids are probably going to outweigh the risks,” Seheult said.

Trump and his wife, Melania, are now among more than 7.4 million americans infected with the virus, with at least 209,000 deaths, the highest in the world. in the United States alone – the highest death toll of any country.