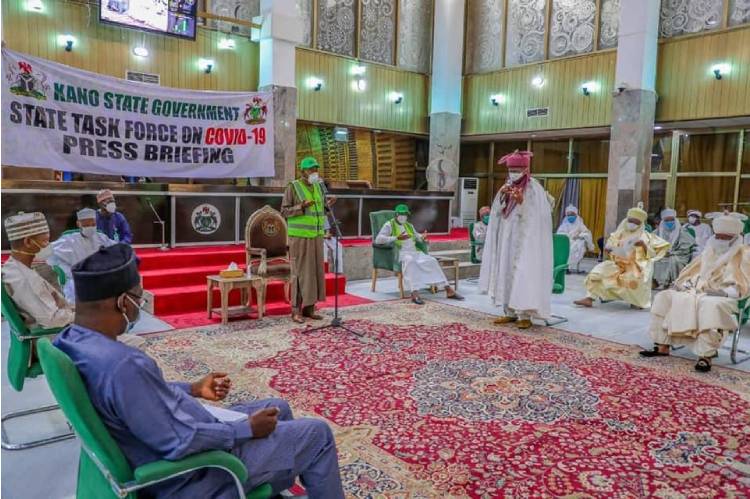 An African group of professionals called African Professionals Renaissance Network, (APREN), based in Dakar, Senegal, has selected Kano State Governor, Abdullahi Umar Ganduje as the Best Performing Governor in Nigeria, in the fight against COVID-19.

In a letter sent to the Governor by the group’s Secretary General, Diouf Bakri Koalack, the group commended Governor Ganduje’s effort in the fight against the global pandemic.

The group emphasised that Governor Ganduje’s effort in the fight against COVID-19 in Nigeria was so glaring that the Nigeria Centre for Disease Control (NCDC) appreciated his effort so openly for all to know and copy.

After long and diligent study of the situation across all the states in the federation,  “…we came to clearly understand that Kano State did excellently well in responding to the global pandemic. This, we assure, is as a result of the unwavering diligence and commitment of the Governor in driving the response.”

“Even before the existence of first index case in Kano State, we learned that, the state was well prepared and put everything in place waiting for any eventuality. When the first index case was in sight, Governor Abdullahi Umar Ganduje was up and doing in responding appropriately.”

“Kano State, under Governor Ganduje has done tremendous work in countering the health problem of COVID-19”,  the  group stated.

APREN, as a group of multitude professionals across African countries, beamed its search light across some selected African countries and underwent a study on how states respond to the pandemic wave.

According to them, Kano State proves to be an exemplary political space, in launching a serious fight against COVID-19, adding that, “When the state was faced with the first case all efforts were geared towards dismembering the pandemic’s strength.”

Governor Ganduje quickly formed a very powerful Task Force and filled it with professionals who clearly understand the problem. Experts in public health, among others.”

“Kano State under Governor Ganduje excels in the fight against COVID-19 more than any other State in Nigeria. Kano became the centre for the training of both health and non-health workers for the Northern Nigeria. This could not have been possible without determined political will from the Governor,” APREN
concluded.