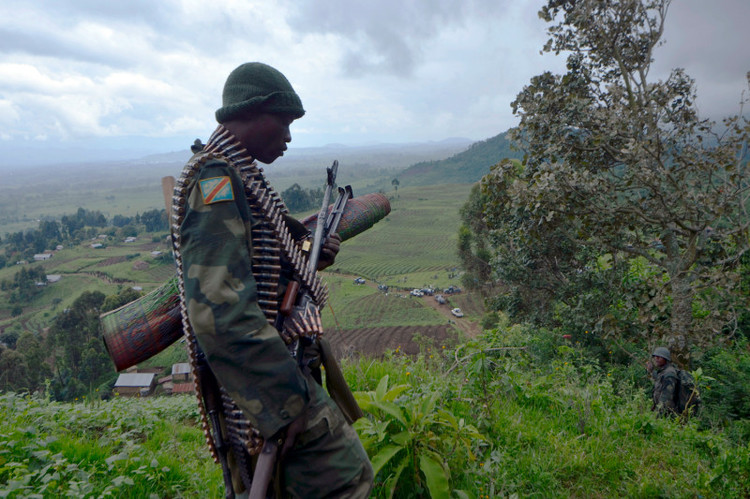 A Democratic Republic of Congo soldier stands on November 5, 2013 on a hilltop outpost in Chanzu in the eastern North Kivu region that was one of the M23 rebels' last stands. Rebels in the Democratic Republic of Congo's powder-keg east surrendered on November 5 after a crushing UN-backed offensive ended their 18-month insurgency in a region that has seen some of Africa's deadliest conflicts. Soldiers and UN peacekeepers sifted on November 6 through the materiel the rebels left behind -- including olive-green rockets allegedly used by the Rwandan military. AFP PHOTO / Junior D. Kannah (Photo credit should read Junior D. Kannah/AFP/Getty Images)

A soldier has shot 12 people dead and injured nine others during a drunken rampage in the eastern Democratic Republic of Congo on Thursday evening.

A statement from the governor of South Kivu province, Theo Kasi, said security services are conducting a search for the gunman in the city of Sange, 15 miles (24 km) from the Burundian border, where the shooting took place, said in a statement.

President Felix Tshisekedi called the attack a heinous crime and offered his condolences to the victims’ families.

Congo’s vast army is widely seen as poorly trained and unprofessional, and its personnel are frequently accused of committing crimes against civilians.

Senior generals are under U.S. and EU sanctions for alleged abuses, and are accused by the United Nations of having supplied weapons to rebels and criminal gangs.