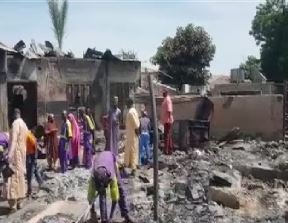 Some traders in Ogun State are counting their losses, after the Sunday late night fire that razed parts of the Ita-Osu International market in Ijebu-Ode.

More than 20 shops were burnt before the inferno was put out by firefighters and the market’s security officials.

The Secretary to the Ogun State government visited the scene Monday and said the state would assist the affected traders.

Speaking with newsmen during the assessment visit, Mr Talabi who described the incident as unfortunate and devastating, appealed to the traders to show love, concern and assist the affected persons, reassuring that the Prince Dapo Abiodun led-administration would not neglect the victims in their peril.