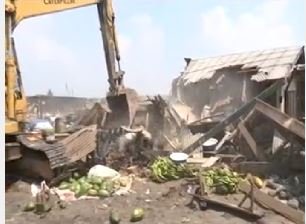 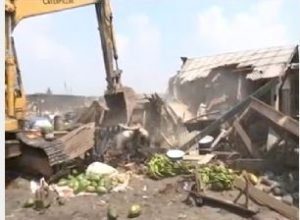 Heavy machines and armed security personnel have taken over the Ketu fruit market after trouble started this morning when officials of the Ikosi-Ketu local council area came to the market and began to demolish the shops.

The traders were seen trying to recover what was left from their wares, before the bulldozers went in.

Correspondent Sarah Ayeku reports that a security official shoots into the air to scare hoodlums who posed as defenders of the fruit market traders. 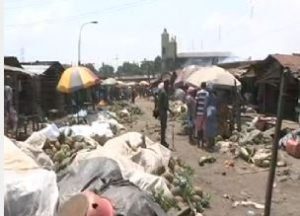 Teargas canister, broken bottles give a picture of what might have transpired, leaving behind women in tears, all raining curses – and tons of fruits in waste.

Some traders who spoke with TVC News said they are displeased at what they termed the government’s high handedness and insensitivity.

TVC News discovered that the government had served a notice earlier, warning they would demolish the fruit market. But the traders say they have on several occasion paid market leaders huge sums of money to renovate the market.

Traders, and Even children return from school to help their parents savage what is left of their livelihood as the demolition. It’s a decision they have to make in fear of what might happen later.

Babajide Otitoju is political analyst of the year