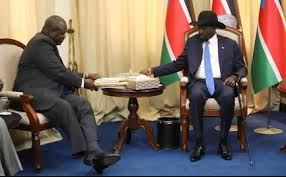 South Sudan’s main opposition leader told a visiting United Nations Security Council delegation on Sunday that he will not be part of a unity government next month, dashing the prospects of progress in a stalled peace process.

Former rebel leader Riek Machar said the parties have failed to agree on ways to integrate the army, a key condition of a peace accord signed last year, and could not see how they could form a government without it.

“We in the SPLM-IO won’t be there because we don’t want to put the country into crisis,” he said. “The aspect needed for the establishment of such a government is not there.”

President Salva Kiir and Machar signed a peace deal in September 2018 after a string of failed agreements to end a civil conflict that has led to the deaths of hundreds of thousands, displaced a third of the population and ruined the country’s economy.

The U.N. Security Council delegation said that the problems identified by Machar can be solved by the Nov. 12 deadline.

“What Dr. Riek Machar is asking is not impossible to do in the next three weeks but need the political leaders to say (we are) going to do it,” Jerry Matthews Matjila, South Africa’s Ambassador to the U.N., told reporters.

Kelly Craft, the U.S. Ambassador to the U.N., said that they are still holding to the Nov. 12 deadline.

“We expect both the government and the oppositions to unify together and to be able to put their people first,” she said.

In May, the two sides agreed to form a unity government in six months and in September said that they will establish a transitional government by Nov.12 as part of the deal.

The pact has stalled because the government has said it does not have the finances to fund the disarmament and integration of the army.

Machar said he met with Kiir on Sunday to discuss the security arrangements and they could not come to an agreement on the issue.

“The security arrangement has to be in place,” he said.

The parties have also been unable to conclude negotiations on regional states, another crucial component of the pact.

South Sudan’s cabinet affairs minister Martin Elia said the head of the army Gabriel Jok Riak has assured them that 3000 members of a protection force will be ready before Nov. 12, 900 of whom will be from Machar’s group.

“Machar should not complain about the delay in implementing some of the key mechanisms because he has representatives in all the committees,” he said.

South Sudan aims to hold elections after a transition period of three years.

The country secured independence from north Sudan in 2011 after decades of war but descended into its own conflict at the end of 2013 after Kiir sacked Machar as vice president.

The United States has said that it will not accept more delays to the formation of a transitional government and will re-evaluate its relationship with South Sudan and may impose sanctions on leaders if a government is not formed by Nov. 12.

The Security Council urged the parties to set aside their disagreements for the sake of peace.

“Now it is time to make a compromise necessary for the formation of the transitional government of national unity,” Craft said.