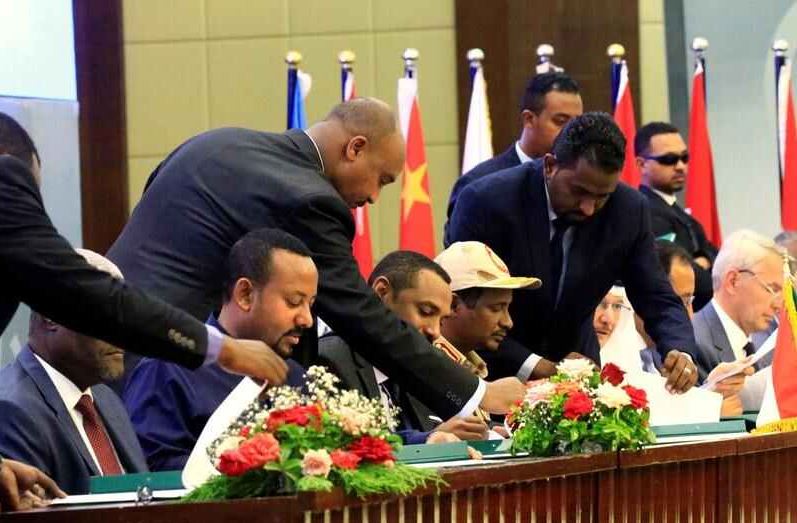 Sudan’s main opposition coalition and the ruling military council on Saturday signed a final power-sharing deal that paves the way for a transitional government, and eventually elections, following the overthrow of long-time leader Omar al-Bashir.

Tens of thousands of people of all ages took to the streets of the capital Khartoum in celebration, with many heading towards the newly renamed Freedom Square, once the site of many of Bashir’s rallies.

Stability in Sudan, which has been grappling with an economic crisis, is seen as crucial for a volatile region struggling with conflict and insurgencies from the Horn of Africa to Egypt and Libya.

One of Sudan’s top generals, Mohamed Hamdan Dagalo, who is deputy head of the military council, and opposition alliance representative Ahmad al-Rabie had initialed the agreement on Aug. 4 and were the main signatories on Saturday.

Those in the room clapped and cheered and an orchestra played a patriotic song.

“I invite everyone to make this day a new stage of getting over the bitterness of the past and looking towards the future,” Lieutenant General Abdel Fattah al-Burhan, head of the military council, said at the end of the ceremony.

Also present were African Union Commission Chairperson Moussa Faki Mahamat, Ethiopian Prime Minister Abiy Ahmed, who helped broker the accord, and representatives from Egypt, Saudi Arabia and the United Arab Emirates, all of which see themselves as influential in Khartoum.

“The coming period will be a test for us, no one will be excluded,” said leading opposition figure Sadiq al-Mahdi, Sudan’s last democratically elected premier. “We will open the door to everyone to participate in Sudan’s celebration.”

The Transitional Military Council (TMC) has ruled Sudan since April, when the military deposed Bashir following months of protests against his rule during which dozens of demonstrators were killed.

The TMC and the main opposition alliance, the Forces of Freedom and Change (FFC), have been negotiating the power-sharing deal since then, but continued unrest, during which more protesters were killed, delayed an agreement.

Dagalo, also known as Hemedti, commands the paramilitary Rapid Support Forces (RSF), some of whose members have been accused of involvement in killing demonstrators who have repeatedly turned out in huge numbers to press for political progress.

Many people stood outside the RSF headquarters in central Khartoum, playing revolutionary songs and chanting at soldiers. Abdallah Ahmed, 24, said: “We have achieved our civilian government, and we have defeated the Islamists.”