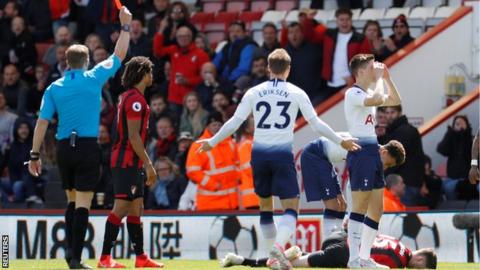 Tottenham suffered a damaging blow to their top finish with a 1-0 defeat to Bournemouth.  South Korean forward Son Heung-min Juan Foyth were sent off for spurs.

Pochettino’s side looked like they would hold on for a point as the match entered stoppage-time, but Bournemouth defender Nathan Ake ended third-placed Tottenham’s stubborn resistance to delay their attempt to guarantee a place in the top four.

In other games, Den-donc-ker volley proved to be the difference as Wolves signed off their first season back in the Premier League at Molineux with a deserved three points against relegated Fulham.

The Belgian international netted with just 15 minutes of play left.

The result means that Wolves have secured their top flight football for next season.

Ryan Fredericks also got on the score sheet on 72 minutes.

Both sides are now safe from relegation.