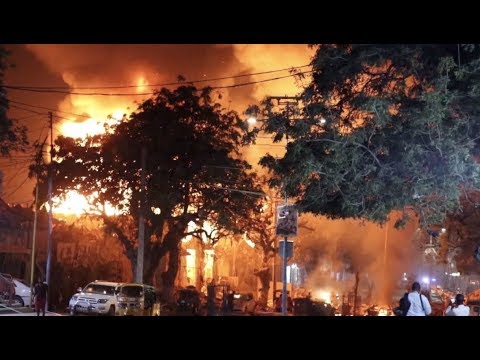 The death toll in a deadly car bomb attack in the Somali capital, Mogadishu has now risen to 36 with dozens more wounded.

The police said  most of the dead were civilians.

Some were trapped in debris while others died at the hospital,where they had been rushed for treatment.

Police officer Hussein Ali told Xinhua said most of the deceased are civilians. Some of the victim’s bodies were trapped in debris; others died in the hospital where they had been rushed for treatment.

“The latest reports we are getting from the car bomb attack at Maka Al-Mukarama road is that it left 36 people dead and 60 others injured, we are still looking for the missing ones,” Ali said.

The police officer added that the attackers had been subdued as the government forces on Friday managed to end the siege on Hotel Makkah Al-Mukaramah which was the scene of gun battle between the militants and Somali troops.

The massive blast which could be felt in various parts of the city took place near the Hotel Makkah Al-Mukaramah at the busy road of Maka Al-Mukarama. Police said the truck loaded with explosives went off, destroying several buildings along the road.

“Many security forces are at the scene and we could hear gunfire at the hotel of Makkah Al-Mukaramah,” a witness, Asad Jayte, told Xinhua.

The attack began with explosives, causing massive destruction of the buildings nearby and burning of business centers around the hotel.

The al-Qaida linked group al-Shabab claimed the responsibility for the attack, saying that it targeted the Hotel Makkah Al-Mukaramah which is popular with politicians and government officials along with high profile businessmen.