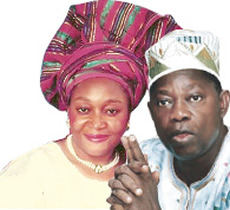 The All Progressive Congress (APC) has called on President Muhammadu Buhari to grant similar honour to Kudirat Abiola, the late wife of Moshood Kashimawo Abiola, the winner of the June the 12, 1993 presidential election in Nigeria.

The APC in a statement signed by National Publicity Secretary, Bolaji Abdullahi said the party calls on the President to consider granting similar honour on Alhaja Kudirat Abiola.

He said the APC believes that Alhaja Kudirat Abiola who paid the supreme price on June the 4th, 1996 for the restoration of her husband’s mandate, deserves to be honoured in her own right as a heroin and martyr of democracy in Nigeria.

APC stated that she mobilised market women, students, activists and other human rights community against military rule and the struggle for a truly democratic nation.

Houses will be subsidized for low income earners in Bayelsa – Dickson