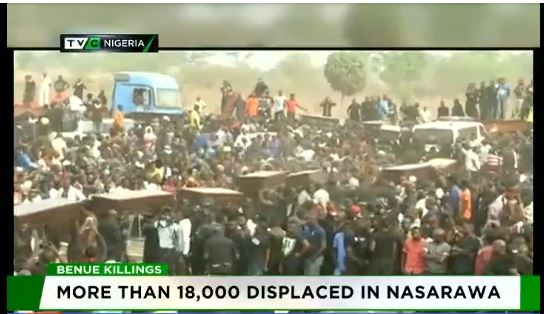 73 Bodies of victims of Fulani herdsmen attack in Benue state were laid to rest in a mass burial yesterday.The victims who died during the recent attack by Fulani herdsmen on villagers and farmers at Guma and Logo local government area of Benue state are being buried on a site at the Industrial Layout along Naka Road in Makurdi.
Thousands of Benue residents including the state governor, Samuel Ortom, trooped out to the funeral. The incessant attacks by Fulani herdsmen has been condemned by Nigerians who are demanding that President Muhammadu Buhari arrest and prosecute the herdsmen involved in the killings as well as pronounce herdsmen as a terrorist group.

Nasarawa State Government however, said over 18,000 people in the state have been displaced due to the spillover from the killings in Benue State. The Special Adviser to Governor Umaru Tanko Al-Makura on security matter, Brig. Gen. Mohammed Adeka (retd.) revealed this at a press conference on Thursday in Lafia.

Adeka, however, added that the press conference followed a decision taken at the state expanded Security Council meeting that was chaired by the governor.

He added that the report received showed that the spillover attacks in some communities in Benue State had led to the displacement of so many people in the border towns between the two states.

Adeka said currently, there were over 18,000 Internally Displaced Persons from various communities of Awe and Keana
Local Government Areas taking refuge in 11 camps in the state, affirming that most of the IDPs were Tiv people.

He said that already, security has been beef up in the affected areas and the government has set up mobile clinics, while it has also distributed relief materials to the IDPs.

However, TIDA president in state, Mr. Boniface Iter, attributed the attack and killings of some Tiv people in some communities of Awe and Keana LGAs to the activities of ‘terrorist group.’

He added that the Fulani in the state were determined more than ever to stay in peace and harmony with other tribes for the
development of the state.

The briefing had in attendance all the security chiefs in the state, Tiv Development Association and Miyetti Allah Cattle Breeders Association of Nigeria, among others.

I didn’t pass English, that was why I studied Estate management – Iyabo Ojo