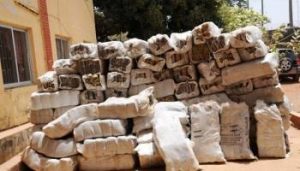 Officers of the Nigerian customs Service in the Sokoto-Kebbi-Zamfara Command have intercepted more than eighty parcels of Marijuana, estimated at over 500 grams, concealed in smuggled bags of used clothing.

While parading the suspect, Command Comptroller, Nasir Ahmed disclosed that the service will do its best to make the zone unbearable for economic saboteurs.

In a bid to fight smugglers and criminal elements sabotaging the nation’s economy through importation of contraband, the Sokoto-Kebbi-Zamfara Command of the Nigerian Customs have intensify patrol along its axis.

The command has also partnered with other agencies operating within the zone.

This Marijuana weighing about five hundred grams was intercepted by men of the command and has since been handed over to officials of the National Drug Law Enforcement Agency (NDLEA) for more investigation.

The command has also seized a trailer load of second-hand clothing with a duty value of seventeen million naira.

The comptroller expressed concern about the number of illegal routes the smugglers are exploring to perpetuate these acts of sabotage against the country.

Comptroller Nasir said his men and officers are well-motivated to smash those engaged in these nefarious acts.

Food security is key to our administration, says Buhari