Lawyers for a Zambian opposition party leader accused of trying to overthrow the government asked a court on Wednesday to throw out the case, saying the state charges were vague and ambiguous.

Hakainde Hichilema, the United Party for National Development (UPND) leader, was arrested last week in a police raid on his home.

He was initially accused of treason on the grounds that he had refused to give way to President Edgar Lungu’s motorcade as it passed through Mongu, a town west of the capital Lusaka.

On Tuesday, Hichilema was charged in court with plotting with other people between Oct. 10 last year and April 8 this year to overthrow the government by unlawful means.

The arrest has raised political tension in Zambia. The Southern African country has traditionally been relatively stable but relations between the government and opposition have been fraught since last August, when Lungu’s Patriotic Front (PF) beat the UPND in a presidential election marred by violence.

The opposition says the vote was rigged but Hichilema has so far failed in his legal challenge against the result.

Defence lawyer Keith Mweemba said on Wednesday that the treason charge was defective in law. “This court has power to quash the indictment and discharge the accused,” Mweemba said. 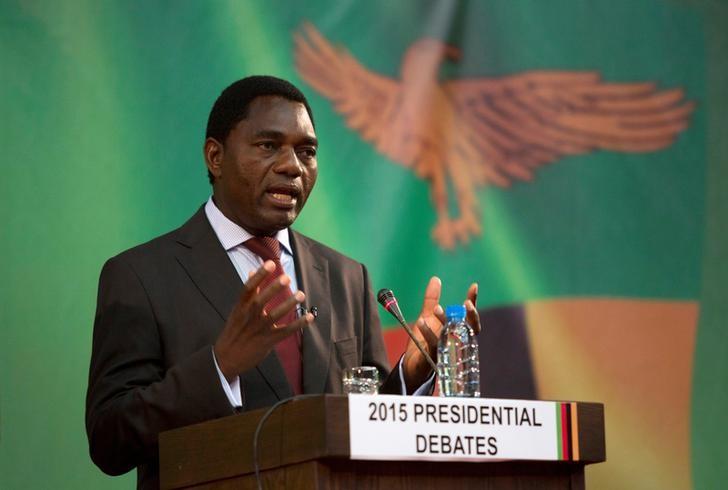 The government has offered no further details on the alleged plot. Prosecutor Gemani Zimba said the state could still amend the charge to make it specific.

Magistrate Greenwell Malumani said a ruling would be made at a later date. Hichilema remains in detention.

“We have all the confidence that (party) president Hichilema and all other accused persons will be set free,” UPND spokesman Charles Kakoma said. “The rulings in favour of the UPND defence team all point to that but we just have to wait for the courts to make the final verdict.”

Lungu’s spokesman Amos Chanda told Reuters: “President Lungu and the government have always had confidence in the judiciary and are of the view that the due process of the law should be allowed to run its full course in this matter.”

Lungu has narrowly beaten Hichilema, an economist and businessman who goes by the nickname “HH”, in two presidential elections. Human rights group Amnesty International said in its annual report that the latest one, in August, was marked by increased political violence.

Authorities had repressed the right to freedom of expression and assembly, while police used excessive force to disperse meetings of opposition parties meetings, it said.

Hichilema and his UPND deputy Geoffrey Mwamba were arrested and charged with unlawful assembly and seditious practices in October after a party meeting, an action Amnesty called at the time a ploy to intimidate and silence the opposition. The pair were granted bail after being charged with sedition.

Dollar edges away from recent lows with French vote in focus