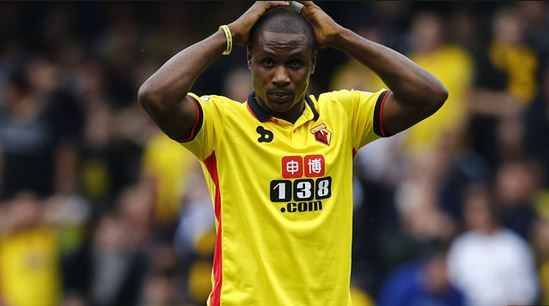 West Brom manager Tony Pulis has never hidden his admiration for the Nigerian international and was hoping to a swap Burundi born Berahino who has been itchy to leave West Brom for Ighalo.

But last night made all the difference as Berahino ended his Hawthorns hell hitting the jackpot when he signed a five-and-a-half-year contract at Stoke City worth £70,000 a week.

Stoke moved to sign the unsettled West Bromwich Albion striker, 23, for an initial £12million fee rising to £15m if he meets performance targets.

Albion had rejected Stoke’s first offer but a breakthrough in negotiations came at around 2pm on Friday.

Ighalo has only netted twice in all competitions this season after rattling in 17 goals last season. He got a mouth watering offer for China move which he turned down.  West Brom’s coach Tony Pulis is however reportedly still interested in the 27 year old former Granada ace