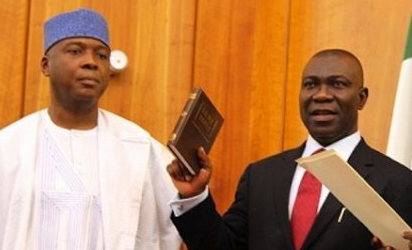 TVC N. There were indications on Saturday that the Federal Government is  no longer interested in pursuing the case of forgery of the Senate Standing Orders, 2015, allegedly masterminded by Senate President, Bukola Saraki, and his deputy, Ike Ekweremadu.

In the fresh report, the police indicted Saraki and Ekweremadu.

The Federal Government had, on October 7, 2016, withdrawn the charges of criminal conspiracy before a High Court of the Federal Capital Territory, Jabi, Abuja. It was gathered that the AGF office received fresh police investigation some days after the charges were withdrawn.

Secretary of the NPCC and a Special Adviser to the AGF, Sylvester Imhanobe, confirmed to our correspondent that the AGF office received the report but that it would not change the earlier decision to withdraw the charges.

But a  source in the Federal Ministry of Justice told our correspondent that the Federal Government also, partly resolved to stop pursuing the case in order to “bolster the rapport” with the Senate, which President Muhammadu Buhari “desperately needs to push through a number of its policies”.

Saraki and Ekweremadu were earlier charged alongside a former Clerk to the National Assembly, Salisu Maikasuwa, and a former deputy clerk, Mr. Ben Efeturi,for allegedly forging the Senate Standing Orders, which were used for the inauguration of the Eight Senate.

All of them pleaded not guilty to the charges and were granted bail.