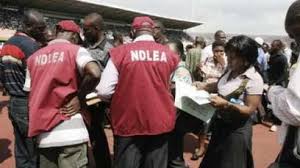 The state Commander of the agency, Mr. Yakubu Kibo, briefing journalists at a press conference in Yola explained that the spare tyre of the cars were stuffed with 840 bottles of cough syrup and codeine,  weighing 62.4kg

He noted that drugs dealers have adopted sophisticated method of concealing their products.

The  commander, parading the suspects before newsmen observed that cough syrup with codeine is one of the banned drugs in the state.

While cautioning the people of the state on the dangers of drug abuse, Kibo called upon all and sundry to put all hands on deck and say no to drug abuse.