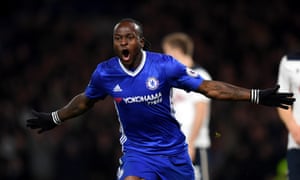 Chelsea plan to enter contract talks with Victor Moses in the coming weeks after it emerged he has become a transfer target for Barcelona.

Moses’ performances in a new wing-back role have been key to Chelsea’s stunning turnaround in form since switching to a 3-4-3 formation.

The Nigerian international scored the winning goal in Saturday’s 2-1 victory over Tottenham, having previously found the net in wins against Burnley and Leicester City.

Barcelona are understood to view him as one of the best right-back options in Europe at present to replace Sergi Roberto.

They have sent a scout to a number of Chelsea games this season.

The Federal Government says it is excited changing young people's lives through its Project T-MAX (T-VET) Maximisation) initiative aimed at...