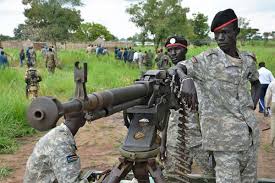 TVC N. The Nigerian army has said that in the spirit of trying to find a lasting solution to the problem of militancy in the Niger Delta region, it will not sit back and allow criminals to have their way.

The army had launched Operation Crocodile Smile to combat Niger Delta militants although the region has recorded some bombing of oil and gas pipelines.

In a statement released by Rabe Abubakar who is the acting director of defence information, he warned militants do desist from terrorising the Niger Delta region or will pay with their lives.

Read the statement below: The Defence Headquarters has re-emphasised that military will continue to abide with the ongoing negotiation effort of the Federal Government with militants in order to have peaceful settlement of the Niger Delta problem.

However, while trying to achieve this feat, the military would not take kindly with any individual or group taking military’s good gesture of adherence to ceasefire and peaceful disposition to the impasse for granted, otherwise military will respond proportionately to any armed attacks against its location in a decisive but professional manner in line with its constitutional mandate of defending innocent citizens as well as national critical infrastructure.

It is also instructive to state that the Armed Forces has the capacity to defend itself just as it did recently when a group of misguided elements under the militancy guise attacked its location at Efut Esighi waterfront in Bakassi Local Government Area of Cross River State where they paid dearly for their evil act.

The Armed Forces therefore warns various belligerent groups in either the Niger Delta or any other part of the nation to desist from any act capable of jeopardising peace and security of our country or they will regret the consequences of their evil action.

The Armed Forces of Nigeria would continue to partner with peace-minded groups and stakeholders to bring lasting peace in any security threatened areas or locations.

PDP and Senator Magnus Abe at war, find out why