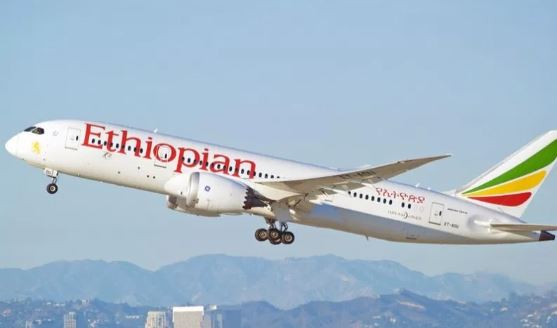 In what could have ended as a plane crash in Lagos on Wednesday, Former President Olusegun Obasanjo and 393 other passengers who were on board an Ethiopian airline aircraft found it difficult to land at Murtala Muhammed International airport in Lagos.

The Ethiopian Airlines aircraft, ET-901, had departed the Bole International Airport, Addis Ababa, at 9:10am, Ethiopian time (7am Nigerian time).

The almost 5-hour flight from the Ethiopian capital to Lagos had been smooth until the pilot attempted to land at the Murtala Muhammed International airport.

Rather than landing on the first touch line of the runway, the pilot overshot it, owing to rain and heavy wind, landing on the third touchline. On realising this, the pilot quickly manouvered the plane back on air, flying out of the Lagos airport.

After hovering around between Lagos and areas suspected to be in Ogun, causing panic among passengers and crew members, the plane landed in Lagos airport, some 20 minutes after the initial false landing.

Former President Olusegun Obasanjo, who was among the 393 passengers , had attended a Stakeholders Dialogue on Continental Trade and Strengthening Implementation of the African Continental Free Trade Agreement (AfCFTA) in Ethiopia.

Other prominent persons on board the aircraft were Ayoola Olukanni, director-general, Nigerian Association of Chambers of Commerce, Industry, Mines and Agriculture (NACCIMA) and Samson Tunde Adebayo, director of ports inspection, National Agency For Food And Drug Administration And Control (NAFDAC).