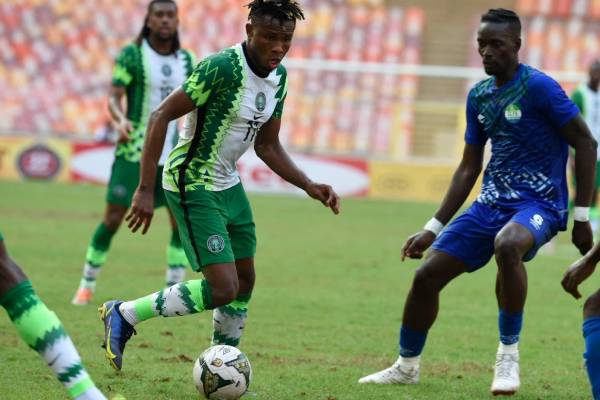 Moses Simon in action during the match with Sao Tome and Princiope in Agadir, Morocco

The Super Eagles of Nigeria have continued their AFCON 2023 Qualifying campaign with an emphatic 10-0 win over the Sao Tome and Principe in Agadir, Morocco.

Super Eagles took the lead in the 10th Minute through Victor Oshimen and added a Second through Alex Iwobi.

The third goal arrived shortly after through Simon Moses while Oghenekharo Etebor added a fourth through a direct free kick in the Second half.

Victor Oshimen who started the rout added three more goals in the second half.

Terem Moffi of Lorient also got a brace in the Second half with Leicester City’s Ademola Lookman also adding his name to the scoresheet.

Emmanuel Dennis scored the final goal after being brought down in the 18 yard finishing calmly from the penalty spoty.

The win which is the First under new head coach Jose Peseiro has also now set a new record as the Super Eagles biggest win in any competitive feature.

Peseiro is now the first Super Eagles coach to lead the team to their biggest ever scoreline.

The Super Eagles’ biggest scoreline before this match was a 10-1 win against the Squirrels of Benin Republic in 1959 at the Kwame Nkrumah Cup.

The last time the Super Eagles also had a scoreline like this was an AFCON Qualifier in 1991 against Burkina Faso, a 7-1 victory at the National Stadium Surulere, a match that is now more famous for the Shorts worn by the Eagles to start the match following the failure of the officials of the Nigerian Football Federation to bring the Sorts for the team’s jerseys to the stadiun from Ota.

It was also the match during which George Finidi and a host of Other Super Eagles players came into prominence leading to the 1994 World Cup in the United States of America where Nigeria was voted the most entertaining team at the tournament won by a Romario Farias and Bebeto inspired Brazil afetr a pulsating penalty shootout with Nigeria’s conquerors in the Second Round, Italy, the kled by the legendary Arrigo Sacchi.

Napoli forward Victor Osimhen set the tone for the victory after putting the Super Eagles ahead on nine minutes.

The Super Eagles will face the Djurtus of Guinea-Bissau in their next game in the qualifiers in September.